The recent USA cooling of relations with Saudi Arabia is too little, too late. After all, like Russia, Saudi Arabia believes it can reach out into other countries and murder critics with impunity. The gruesome suffocation and dismembering of the Saudi critic, Jamal Khashoggi, in the Saudi embassy in Istanbul is a case in point.

The Biden administration has released an intelligence assessment confirming that Crown Prince Mohammed bin Salman (MBS) was responsible for the murder. This followed an effort over several years by the kingdom and the former Trump administration to deny the clumsy trail of evidence that pointed directly at MBS and his approval for the butchery.

A United Nations investigation team released details of the timeline of Khashoggi’s grisly murder. This includes actual recordings from inside the Saudi embassy in Istanbul as the murder and dismembering of the body took place. The Turkish secret intelligence service, MIT, had inserted a bug in the embassy room. This recording shocked the world. 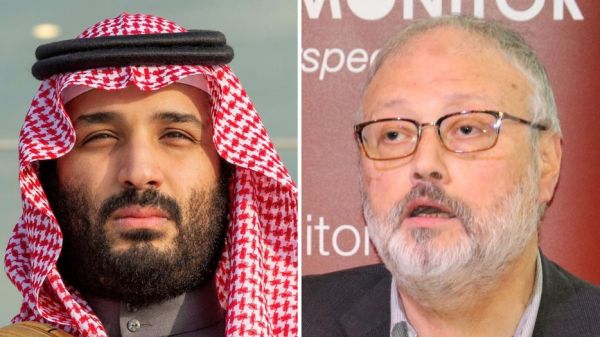 Even the private jets carrying the murder team from Saudi Arabia to Turkey were under the control of MBS. They were owned by a company that less than a year earlier had been seized by MBS, according to recently filed court documents seen by CNN. The Gulfstream jets were then transferred to Saudi Arabia’s Sovereign Wealth Fund, chaired by MBS. (1)

It’s impossible to believe that jets under the direct control of MBS could have been somehow commandeered by two jet jockeys out for a jaunt to Turkey, without authorization, and who just happened to transport a security team that included a forensic specialist with a bone saw. And then, shortly after Turkish security bugs recorded the death and dismemberment of Khashoggi at the Saudi embassy, these jet jockeys just happened to fly this same team back to Saudi Arabia.

The former president Trump used his veto power to block congressional efforts to punish the Saudis by cutting off weapons sales and U.S. support for the kingdom’s vicious military campaign in Yemen. Instead, typically, Trump offered Riyadh additional arms worth hundreds of millions of dollars. (ii)

The Trump collaboration with the Saudis was more about Trump’s weakness for flattery and being feted and fawned over, than it was about any reasons of state. Saudi Arabia was the first country Trump visited after his inauguration, and the Saudis blatantly pandered to Trump’s weakness by showering him and his family with expensive gifts and honors. And anyway, Trump has a liking for dictators, as with his admiration for the Russian president Putin. (iii) Saudi Arabia’s gifts for Trump included the highest civilian honor from the Royal Court at Riyadh. This honor was a lavish gold necklace and medallion, the King Abdulaziz al Saud Collar, for Trump’s “quest to enhance security and stability in the region and around the world.” 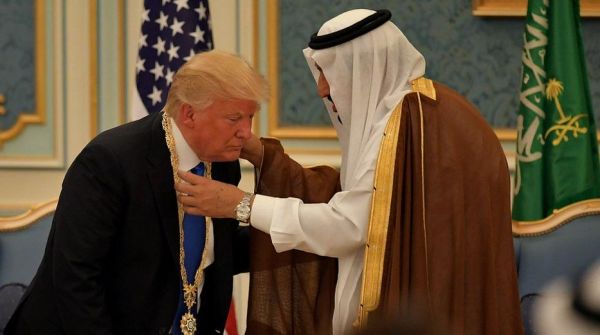 A total of 83 other Saudi gifts to Trump and his family included robes lined with white tiger fur, another lined with cheetah fur, a dagger made of pure silver with mother of pearl sheath, a picture of President Trump, and strangely, a copy of the Kuwaiti constitution. (iv)

Trump’s son-in-law, Jared Kushner, also shared in the largesse. In October, 2017, ‘Kushner’s company received a $57 million loan from Fortress Investment Group, which had been recently purchased by SoftFund, a Saudi investment concern, to bail out its troubled property at One Journal Square in Jersey City’. (v)

But the sycophantic treatment of Trump and the butchering of Khashoggi pales into insignificance compared with the Saudi funding of terrorists in a way that has more directly impacted the USA. Following the 9/11 attacks in New York, 15 of the 19 hijackers were identified as Saudi nationals, and the mastermind of the attack, Osama Bin Laden, was also a Saudi.

The US Senate Select Committee on Intelligence released a report in 2002 on Saudi involvement in the 9/11 attacks, but 29 pages of this report relating to material and financial assistance to the hijackers were redacted. These pages were not made public until pressure from families of the 9/11 victims led to their release by the Obama administration in 2016.

Foreign Policy magazine highlighted quotes from the redacted pages of the Senate Intelligence Committee’s report, and described them as ‘devastating’. (vi)

Here is a selection of the once redacted quotes:

One of the individuals identified in the pages as a financial supporter of two of the 9/11 hijackers, Osama Bassnan, received a “significant amount of cash” from “a member of the Saudi Royal Family” during a 2002 trip to Houston.

Page 418: “Another Saudi national with close ties to the Saudi Royal Family, [deleted], is the subject of FBI counterterrorism investigations.”

Pages 418 and 419: Detained al Qaeda leader Abu Zubaida had in his phone book the unlisted number for the security company that managed the Colorado residence of the then-Saudi ambassador to the United States, Prince Bandar bin Sultan.

Page 436: The general counsel of the U.S. Treasury Department, David Aufhauser, testified that “offices [of the Saudi charity al-Haramain] have significant contacts with extremists, Islamic extremists.” CIA officials also testified “that they were making progress on their investigations of al-Haramain.… The head of the central office is complicit in supporting terrorism, and it also raised questions about [then-Saudi Interior Minister] Prince Nayef.”

The author of the Foreign Policy article summarized the findings in this way: ‘official Saudi money ended up in the pockets of the attackers, without a doubt. I once asked a British official : “How do we know?” He replied we know what account the money came out of and where it ended up’.

CNN also reported that ‘a number of FBI agents and CIA officer complained to the Joint Inquiry about a lack of Saudi cooperation in terrorism investigations both before and after the September 11 attacks’ and highlighted one post 9/11 episode in which ‘an FBI agent couldn’t get the Saudi government to provide information on Saudi nationals despite providing copies of the subjects’ Saudi passports’. (vii)

Cooperation with the Saudis improved, but only after the Saudis experienced their own terrorist bombings in Riyadh in 2003, after which the Saudi government announced, and in some cases, undertook domestic educational and religious reforms. According to the Middle East Quarterly, these included ‘legal, regulatory and institutional … and political reforms’. However, the Middle East Quarterly also observed that ‘U.S. agencies do not know the extent of the Saudi government's efforts to limit the activities of Saudi individuals and entities that have allegedly propagated Islamic extremism outside of Saudi Arabia’. (viii) 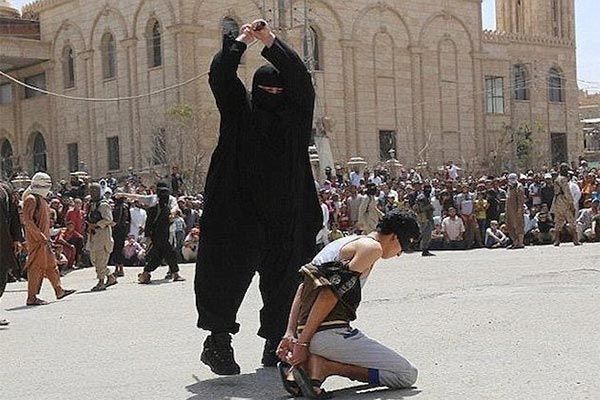 It’s easy to be cynical about Saudi assurances of pursuing and punishing terrorists. For example, a recent analysis of the 2019 executions of 37 supposed terrorists in one day in Saudi Arabia revealed that most of those executed were minority Shiites. Amnesty International reported that these victims were convicted “after sham trials” that relied on confessions extracted through torture. (ix) According to Al Jazeera, failure to take decisive action against MBS and Saudi Arabia is ‘immoral. It would deprive Khashoggi and his family of their right to justice. And it would pave the way for Saudi Arabia and other authoritarian governments to continue to murder and persecute dissidents with impunity’. (x)

But Saudi Arabia is too important and powerful for its leaders to be labelled and treated as murderers or terrorists.

As Riedel points out, even though the U.S. has reduced its own Saudi oil imports, the global economy depends on stability in the oil markets that Saudi Arabia, as one of the world’s largest oil producers, could crater on its own. “If Saudi oil exports came off the markets, the global economy would collapse,” Riedel said. (Ibid.)

Ah, yes. Pragmatism and politics. It’s a shame that the USA won’t do anything more than give MBS a slap over the wrist.

Despots revel in notoriety. A bit of tut-tutting won’t deter despots. It will just make them more careful next time. And ensure they check for bugs before they murder and dismember anyone else.

[vi] Henderson, Simon, 18 July, 2016, Foreign Policy. ‘What we Know About Saudi Arabia’s Role in 9/11 The Saudi government still says it had no connection to the hijackers. Newly released information proves otherwise’.